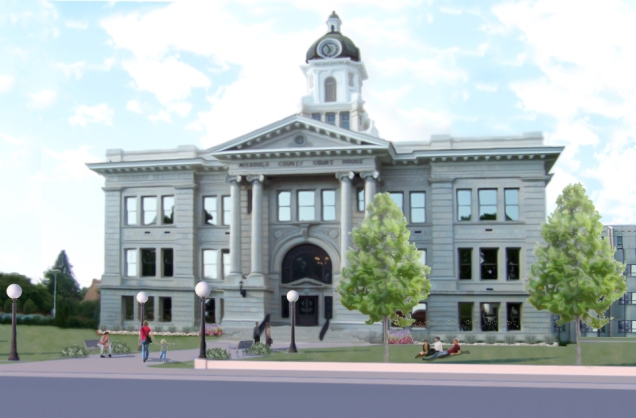 The fifth and final phase of the Missoula County Courthouse remodel and renovation project is set to begin Wednesday, June 21. The fifth phase focuses on the building exterior, including reinvigorating the lawn, updating the landscaping and irrigation, and installing original restored copper entrance doors to the east, south and west entrances of the courthouse.

“Missoula County is fortunate to have a beautiful courthouse designed by AJ Gibson,” Commissioner Jean Curtiss said. “The Courthouse lawn has served as the town square for over a century and it is time to give it new life. This phase of the Courthouse renovation will provide the landscaping to frame and complement this beautiful building for the next century.”

Highlights of the fifth phase include:

To reinvigorate the urban forest, the trees on the courthouse lawn will be replaced with a native species.

“We think of trees as living forever. However, trees have a life cycle,” said Chris Boza, City of Missoula forester. “The trees surrounding the courthouse have reached the end of that life cycle and need to be replaced. Now is the time to renew the circle of life for future generations of Missoulians to enjoy.”

The rendering depicts the anticipated look of grounds after work has been completed. Several agencies have contributed their time and expertise to develop the plan, including Jackson Construction, the City of Missoula, A&E Architects and Pharris Design.

“The current construction project provides a window to proactively replace all of the trees at once, which allows us to maintain the historical intent of the original planting,” said Ryan Smith, landscape architect for Pharris Design. “In addition, it provides an opportunity to replace the Norway maples, which are invasive, with the noninvasive sugar maples.”

The courthouse lawn will begin to be fenced off on Wednesday, June 21, and tree cutting will begin on Monday, June 26. As work will continue throughout that week, curbside parking on the east side will be closed off. Areas will be reopened as they are cleared.

Exterior work is expected to continue through the beginning of October. County project staff worked to ensure cost savings along the way, scaling back scopes of work to provide the desired design at the lowest cost of $790,778.